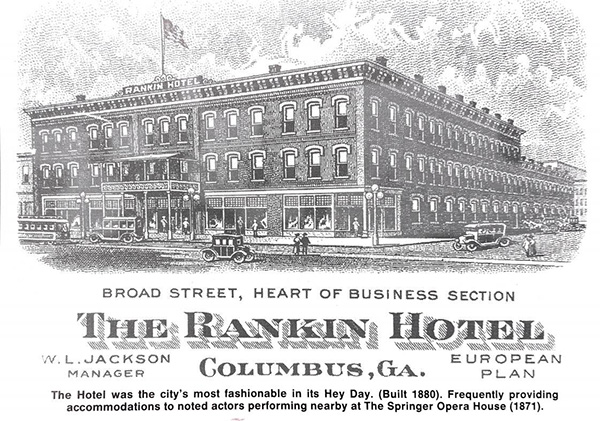 The Rankin Garden, Atrium and Livery embodies a rich piece of Columbus history, almost as old as the city itself. The building we now occupy was once known as the Rankin Hotel, opening after being purchased by Scotsman James A. Rankin in 1864. The wood-structured building was rebuilt with brick after suffering a fire in 1878, and continued operating as a hotel for another hundred years until changing hands and eventually becoming the Rankin we know today.

While walking the building, you can encounter history at every turn. The original cast iron marquee, marking the entrance to the old hotel, is still standing and prominent at our Broadway entrance. The Victorian details of the building, like the aged brick archways, serve as a window to the past and a doorway to present day beauty. Our largest event space, the Livery, once housed horse and carriage for hotel visitors, and later hosted the Springer Opera House Guild’s annual Governor’s Dinner in 1978.

Noted actors and high profile guests to the late Rankin Hotel include:

The Rankin Square was placed on the National Register of Historic Sites and Places in 1977. Today it serves as a beautiful and historic setting for intimate events and gatherings.